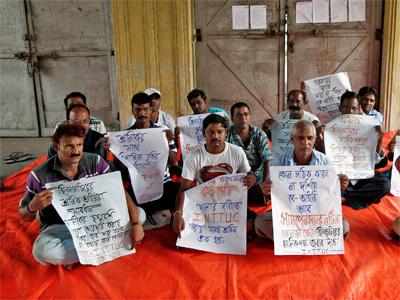 Senior officials of Hindustan Motors Ltd met West Bengal labour minister Purnendu Bose on Thursday and promised to make ‘partial payment’ of 5-month wage arrears to its 2,600 employees at the Uttarpara unit of the company on June 2, 2014.

The last wages were paid in March 2014 of the November 2013 dues. After the bipartite meeting, the labour minister told newsmen that the company has for the first time informed the labour department that it had moved the BIFR in February, following erosion of the company’s net worth. It has also conveyed its decision to suspend work at Uttarpara from May 24.

“The fact that the company failed to take the state government in confidence on issues was pointed out to the management at the meeting today ,” Bose said and added that representatives of the management have promised to meet him again on Tuesday.

“At present, our department is aware of the payment arrears to employees before work was suspended. I have discussed the issues of other arrears as well that is due from the company, like sales tax and land tax arrears with state finance minister Amit Mitra.

Other departments of the state government will engage with the Hindustan Motors management in the near future,” Bose said. Suspension of work denies workers of their wages from the time it is notified.

The management, Bose said has also informed him about its inability to run the operations of the Uttarpara plant which makes the Ambassador car due to financial problems and its failure to restructure the company by bringing in a partner.
ADVERTISEMENT

In a statement issued on Thursday, the company stated: “The company has no intention of suspending work for an indefinite period, but given the present cash flow challenges arising out of continuing losses over the past 10 years, increased material cost on account of lower volumes and productivity of less than 1 car per employee per year as compared to the prevailing industry norm of 365 cars per employee per year makes the present operational structure unviable and unsustainable from the point of resuming operations.

“The company notice said: “The current situation continues to remain challenging more so as the company has no disposable assets or investments, which can be utilised to fund cash losses incurred out of operations at Uttarpara.”

The company has requested for a suitable time frame within which it will try to restructure the organisation and reduce its liabilities before deciding on subsequent steps.

The state labour minister said that the West Bengal government was keen on reopening the unit. “We will take all legal measures to run the company. We have been told that the company has held discussions with two or three Chinese companies for a possible tie up,” he said.
ADVERTISEMENT