Goa All Out: The new restaurant O Pedro by the Bombay Canteen team is a hat-tip to the swinging state

By Anoothi Vishal, ET Bureau | Updated: Oct 08, 2017, 01.34 PM IST
Its name board is covered in a thick cloth. The curtains are drawn to discourage anyone from peeping inside. The restaurant I am scheduled to eat at, one muggy day in Mumbai’s Bandra Kurla Complex (BKC), is kept under wraps. “Am I your first guest?” I ask chef Floyd Cardoz as we step inside O Pedro (and I realise that is indeed what it’s called, thanks to the good chef’s T-shirt with the restaurant’s name on it). “Second,” he quips, “after me!”

Second can sometimes be an exciting place to be in. Especially, if it is a second restaurant by the team that redefined Mumbai’s food scene with its first project two years ago. When The Bombay Canteen (TBC) opened in Kamala Mills in early 2015, it had nothing to prove. Partners Sameer Seth and Yash Bhanage were new to the restaurateuring world and Cardoz, one of the most respected Indian chefs in New York, was known only to the cognoscenti. Since then much has changed.

The Bombay Canteen, with its chic regional Indian food, has a cult following that can perhaps only be built around a solid, passion-fuelled project. Its success has been based on well researched, well-presented food and drink, not merely PR-fuelled buzz that evaporates a few months into a restaurant’s opening.

That’s the reason why this second restaurant by the same dream team has been so highly anticipated (and thus kept such a secret). Ever since news got out late last year that the TBC folks had signed on a new space in BKC, guessing games were on: Will it be an outpost of Paowalla, Cardoz’s successful New York restaurant? Will it be a bar? None got it right entirely. 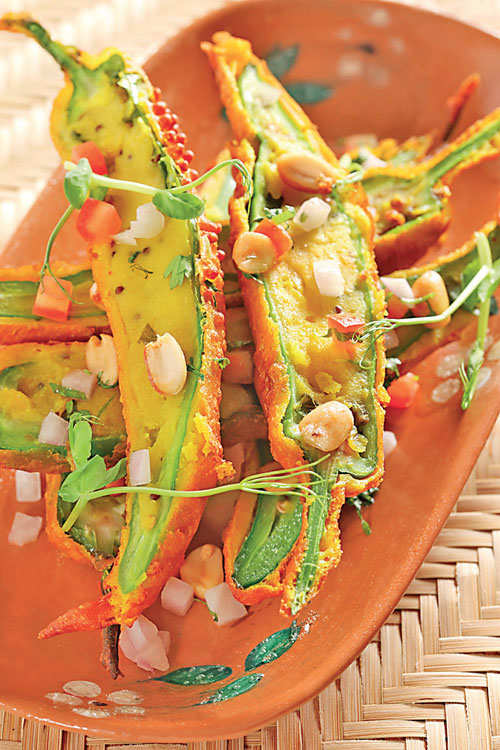 ADVERTISEMENT
O Pedro is a Goan-meets-Portuguese bar-restaurant, space where incredibly detailed references from Goa, Portugal and even Macau, which shares a Portuguese heritage with Goa, have been built into food, drink and design that are deceptively easy on the eye and palate.

Goa via Portugual
With its vaulted ceiling, reminiscent of old churches, potted greens, wicker chairs, wooden furniture, azulejos tiles and blues and whites, O Pedro reminds you of an old Goan home. There’s nothing that is in your face. Instead, as you sit down and begin to soak in the languidness that the design seems to inspire, it becomes apparent that the restaurant is going to transport you to the famous relaxed Goan state of mind at odds with the glass-and-concrete of BKC’s corporate world outside. 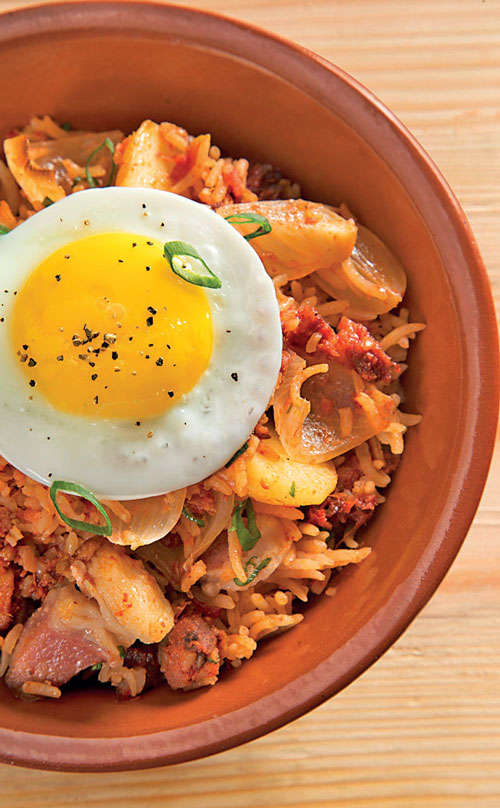 ADVERTISEMENT
“Goa is the favourite vacation spot for many. A lot of people have a Goa connection,” says Bhanage, explaining why they zeroed in on the Goa theme. While the idea of Goa may be popular and accessible, for most people it only connotes beaches, cheap liquor and spicy curries. For restaurateurs and chefs keen to push the creative envelope, this perception and the resulting expectations of the dining public can be problematic. How does one lift the idea of a cuisine and culture that has already been reduced to its lowest common denominator and yet make it acceptable to a large, middle-class audience? 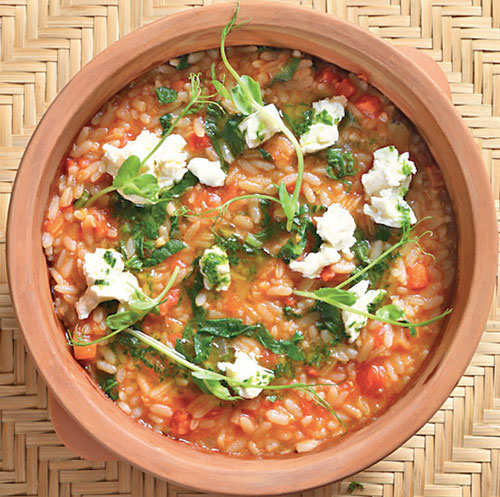 That’s where The Bombay Canteen team’s pedigree and Cardoz’s stature as a chef stands out. They take the commonplace (the idea of Goa), refine it by building layers and nuances that go beyond pop perceptions, then simplify it all again and dish it out. That’s how I can best sum up what O Pedro brings to the table. 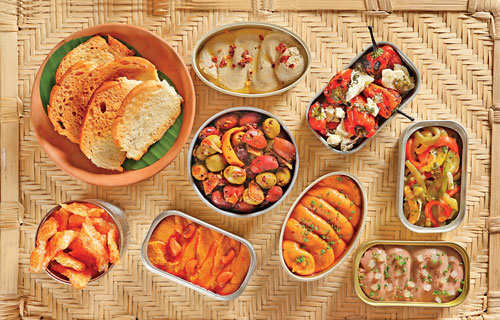 As dishes come rolling out of the kitchen in non-intimidating quarter, half and full plates and you bite into bold flavours — fresh breads, grilled seafood, freshly made chips with the tartness of lime, the kind you invariably get in Portugal or Spain with your wines, beachy cocktails and, yes, curries — the cerebralness of it is not immediately apparent. It’s hiding behind this deliberately constructed ease.

The breads are standout, all made in-house. The Portuguese introduced pao to India. Panjim and South Goa were known for their bakeries turning out everything from poee and paos (both traditionally use toddy as fermenting agent) to katricho pao (scissored bread) and kankda (bangle-shaped, hard breads). The bakeries are threatened with extinction, but some of the breads have made it to the O Pedro kitchen.

An evening at the bar is best kicked off by lining the stomach with carbs. Order a round of freshly baked poee (which resembles pita) with butters flavoured with the likes of chorizo and lard. There’s also a banana and fennel bread, mimicking a puffed bhatura, but baked. At O Pedro, they serve it with a Saraswat-style green gram curry in a nod to homestyle cooking from the state. 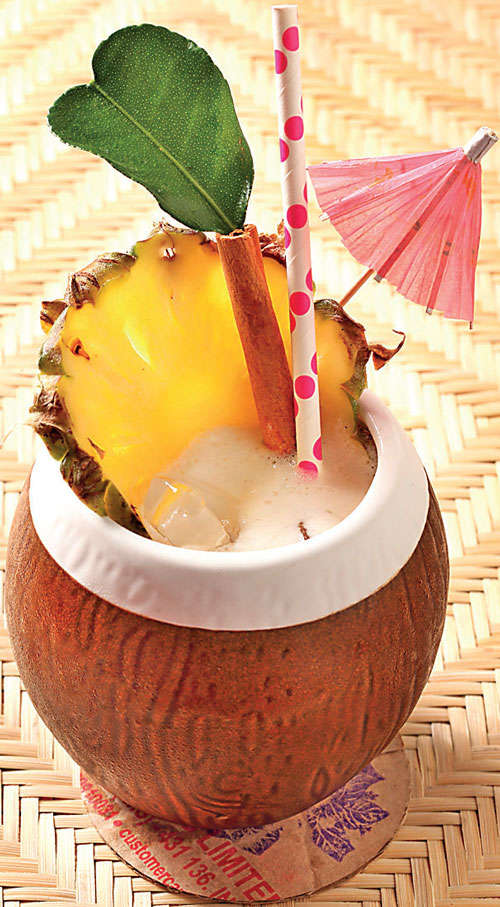 Preserved fish has been a Portuguese influence too. Bacalhau, the Portuguese term connoting dried and salted cod, dishes are common from Portugal to Brazil and Macau. In Goa, the balchao, a method of pickling in vinegar to preserve, came about as a result of the Portuguese influence. The menu makes references to all of this but also to canning, the industry that was prominent in Goa much before the rest of India got familiar with tins of sardines. There’s a nod to this when the fish pate comes out in little can dishes.

Seth and Cardoz travelled to Portugal early this year and came back with even more links and ideas that appear on our plates. The rice soups of Cardoz’s Goan childhood are married with flavours from Portugal’s tomatoey seafood dishes. The famous Lisboa pastel de nata (that inspired Macanese egg tarts) makes an appearance too. There are grilled dishes referencing both the Iberian traditions as well as Cardoz’s memories of Goan homes filled with the smoke of jackfruit or mango wood used to fire ovens. Finally, there is the chorizo, the sausage that came to Goa via Portugal and got spiced up in the process. A legit chorizo pulao is on the table finally outside a Goan home.

Unsurprisingly, it is made from a tweaked version of Cardoz’s family recipe. What remains untinkered is the heirloom bebinca, the layered cake. “Fourth-generation Cardoz recipe,” the chef announces, as we count the layers (seven).

To do a Goan bar can be challenging outside the state, considering that none of the fantastic home-made liqueurs, often brewed by the Catholic aunties, using fresh fruit, are legally allowed to be transported. The law applies to feni as well, Goa’s most famous spirit. O Pedro skirts the issue by making its own brews. From a coconut-infused spirit to red rice and triphal tinctures, kokum and fennel shrubs and amchoor-flavoured vodka, the bar is armed with inspirations to keep things happy every hour.

It’s rather early in the day to start a cocktail programme but since this is make-believe Goa, we have a go at it. Pina Baga Lada (with rum, kaffir, pineapple and starfruit juice) is as deceptively innocuous as any pina colada. Finding Funny (cashew-infused spirit, fennel and cucumber) is almost my drink of choice but isn’t because Bhanage who is quite a whizz at mixing things up puts Mr Fernandez’s Fancy Drink on the table. With kokum-infused rum, triphal tincture and Paul John whisky, this is seriously fancy and enough to sway us even at 3 pm!

Instead of Goa’s Kings Beer, there’s a collaboration with Great State Ale Works (a craft brewery based out of Pune) to serve up coconut pale ale and another variant with tamarind. An average meal for two with alcohol is pegged at Rs 2,400 plus taxes, which keeps this in the upscale, affordable bracket.

Repackaging the Beach
This sort of unique detailing in a restaurant can only happen — and more importantly be sustained — in an individualistic space, chefled, with individual restaurateurs keeping a close eye on the front and back ends. That has been the kind of involvement at The Bombay Canteen. Clearly, these concepts are not entirely scalable, at least in their full versions. Seth seems to agree and shoots back: “It depends on what one perceives as success. Is it merely growing chains?”

It’s a valid question to ask in today’s restaurant scape, when for most credible restaurant companies an uphill task is to create distinct and interesting restaurant concepts while trying to scale up. The Goan bar story, tweaked to suit millennial middle India, has been trending since the beginning of this year when restaurateur AD Singh launched Lady Baga, recreating the Goan shack experience of the 1970s-80s in Delhi. 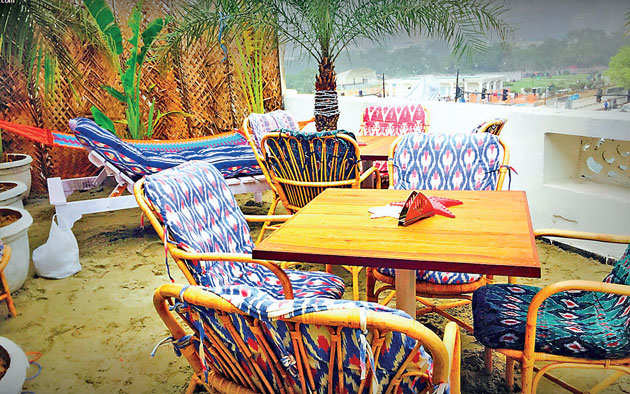 In October, two more outlets of the brand will make an appearance at Kamala Mills and in Bengaluru. It’s one of the brands that Singh thinks has the potential to grow in metropolitan India, because like the TBC team gauged, Goa and all that it connotes do have an audience connect. “What I am trying to do is different from a standalone space. The idea is to build a chain and create a credible restaurant company with 100 restaurants in the next five years,” says Singh.

How to bring out unique facets of an experience that is so well known to all levels of consumers, from the discerning to the plebian, is only one of the tightropes restaurants must walk. The challenge is to create food and beverage experiences that offer the comfort of the familiar while still being exciting, new and upscale (for “lifestyle restaurants”) rather than street or shack traditions.

We still have to see how the corporate BKC audience and Mumbai, in general, take to the Goan-Portuguese referencing at O Pedro despite the fact that in the Maximum City familiarity with seafood and coastal flavours is high.

In Delhi’s Connaught Place, however, where Lady Baga has been incubating, there have been teething problems aplenty. Singh agrees to supply chain issues which led to seafood dishes like crab and mackerel going off the menu. There has now been a change in the chef. Issues like consistency as well as a redefining of what exactly is going to be on offer (home-style Goan dishes, shack-style Western dishes and some fusion elements like a balchao-flavoured sandwich) had to be addressed. However, one of the limiting factors has been the audience itself and we see it reflected in menu changes — clams going out and paneer creeping in. “Hopefully, with the new chef on board in the new Mumbai space, we will be able to achieve and execute our vision better,” Singh says. 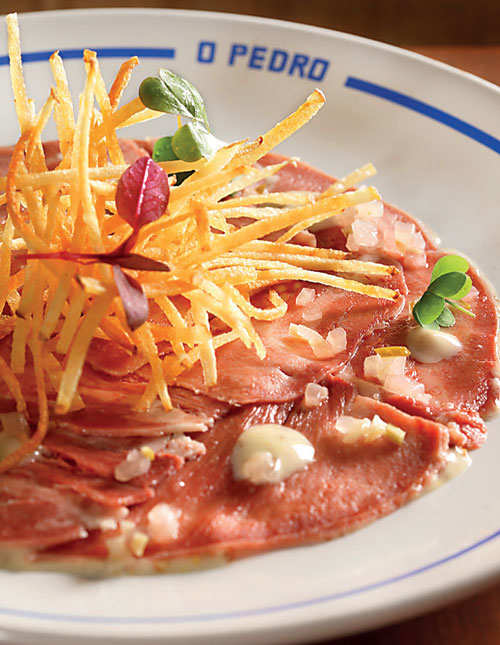 There are plenty of debates about whether Delhi or Mumbai is the most sophisticated restaurant market in the country. However, these are not homogenous markets — every pocket has its own dynamics and tastes. What remains certain is that a less-exposed and the less-cosmopolitan crowd may not appreciate the different nuances of a unique cultural experience.

Restaurants, both individualistic ones like O Pedro and chains like Lady Baga must be able to crack this puzzle: how to build all that we love about the state into quality experiences while still letting it be broad-based enough to stay relevant to large chunks of millennial India.

Whether and how Goan cuisine repackages itself is going to be worth watching — and tasting.

Share this NewsWhatsappFacebookTwitterLinkedInemailSaveaPlus
Cancel
Business News › Magazines › Panache › Goa All Out: The new restaurant O Pedro by the Bombay Canteen team is a hat-tip to the swinging state
Text Size:AAA
Sign InSign Up