How the galouti kebab assumed mythic proportions in the City of Nawabs, Lucknow

Lucknow’s legendary 'nawabi' sensibilities, often exaggerated and caricatured, have been on a decline.

By Anoothi Vishal, ET Bureau | Updated: Feb 26, 2017, 11.34 AM IST
As any community or nation progresses, its diet is the most salient guide to its refinement,” writes Abdul Halim Sharar in his classic Guzishta Lucknow, an early 20-century Urdu narrative about the culture, lifestyle and cuisine of Awadh under the Nawabs.

But Lucknow’s legendary “nawabi” sensibilities — often exaggerated and caricatured — have been in steady decline, with newer impulses taking over. Sharar’s world does not exist today. However, when I was growing up in Lucknow, from the mid-1980s to the mid-90s, many of the old world courtesies and charm were still in evidence. The city was already in the throes of big change in that crucial decade. The politics of the Mandal commission and the Babri Masjid demolition had begun altering its social fabric. Beneath the unrest of a new emerging order lay layers of an older Lucknow — of several older Lucknows summoned up in the foods that we continued to eat and remained partial to.

An Assorted Palate
Surprisingly, the memories of eating out in Lucknow have nothing to do with kebabs, the food the “city of nawabs and kebabs” is perhaps best associated with today. They are about decadent cream rolls from JJ Bakers in Hazrat Ganj, bought surreptitiously after sneaking out of the back gate of La Martiniere, during school hours. They are about the occasional treats of kali mirch chicken, peppered and roasted, from a shop outside the magnificent Charbagh railway station; the chicken certainly not a nawabi delight but a much later, post-Partition gourmet entrant to Lucknow. They are about special occasion dinners at Royal Café or Falaknuma, the rooftop restaurant at the Clarks Avadh; and excursions for chaat, nimish, thandai and falooda, whose charms were dimmed somewhat by the just emerging pleasures of chowmein at Mini Mahal. 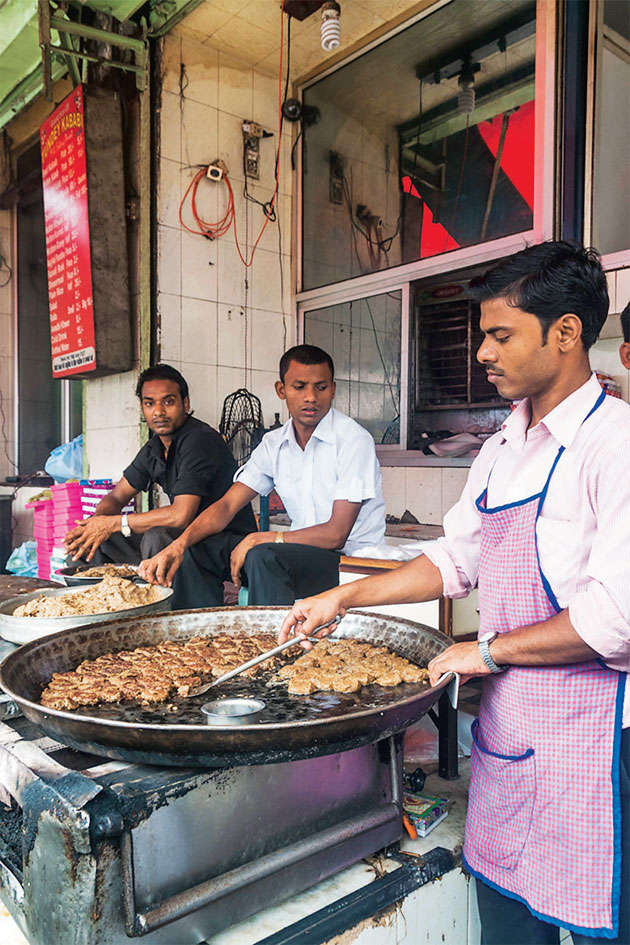 They are also about the asli (pure) ghee nugdi ke laddoo from Ram Asrey, the sweet shop whose history went back to 1805, Lucknow’s oldest. The tiny, dot-like orange boondi pearls of the laddoos held us enthralled. Why were these small grains made from chickpea flour called nugdi? Much later, I conjectured that the name was a reference to the Urdu “nuqta”, the small dot used in the script. This was one of the finest expressions, literally, of India’s Ganga-Jamuni culture that we gorged on! Different Lucknows, belonging to many different time periods and different communities, were expressed in each of these dishes.
ADVERTISEMENT 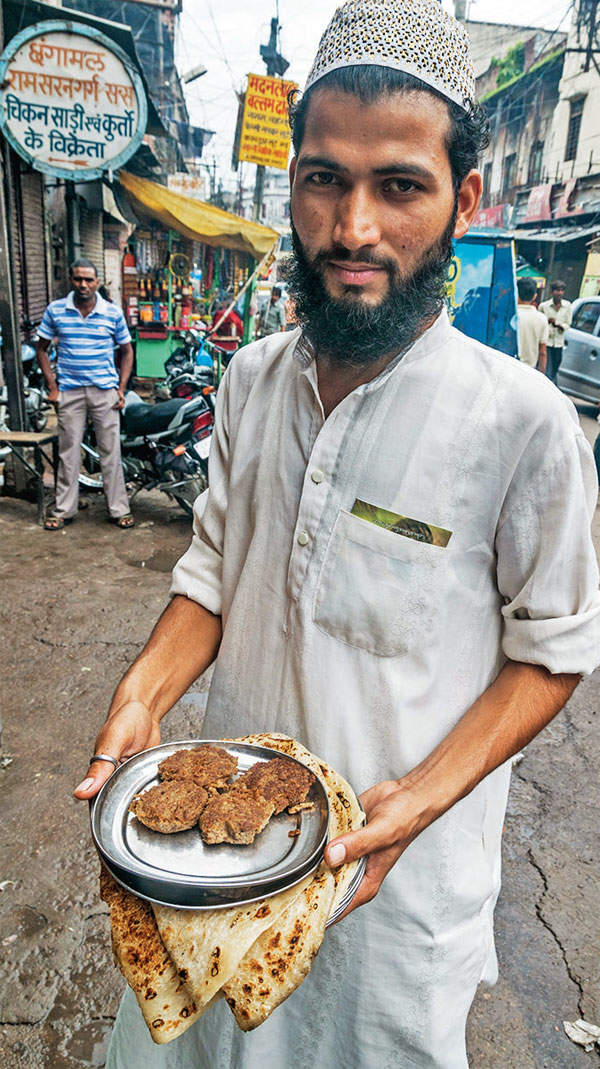 Kebabs were always home cooked — and it was always shami kebab, the best of which are still only to be found in homes, not in restaurants. Galawat ke kebab, whose distinguishing feature is that the minced meat is tenderised with papaya (or raw mango), was not so well known. This, even though a small shop near Akbari Gate in Chowk, almost unreachable save on a rickety rickshaw, had been serving them up since 1905. 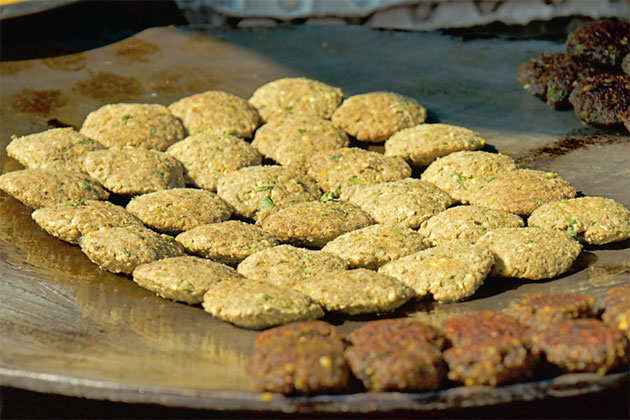 Shami kebab, the ancestor of the galauti, is more painstaking to cook

ADVERTISEMENT
Galauti kebab and Tunday Kababi are now part of a much larger cultural consciousness around indigenous food traditions in India. You couldn’t have not heard of them if you consider yourself a connoisseur or even an aspiring foodie — and who isn’t one, these days? In 1996, the year I left Lucknow, Mohammed Usman — the grandson of the legendary onearmed cook Haji Murad Ali who had first opened the tiny kebab shop in Chowk catering mainly to the working classes — set up a branch of Tunday Kababi in Aminabad, a market more accessible and more pop than the older part of the city. 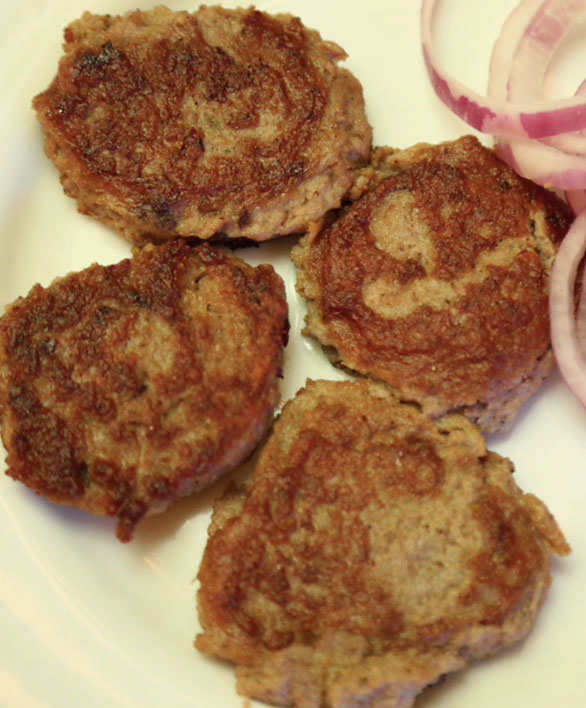 Galauti kebab and Tunday Kababi are now part of a much larger cultural consciousness around indigenous food traditions in India.
ADVERTISEMENT

That became the turning point for the rediscovery of the galawat ke kebab, or galauti as it is colloquially known. Instead of using exclusively “bade ka meat” or buffalo, like in the old days, the Aminabad branch also started using the more accepted goat meat, thus extending its audience. The establishment, however, kept to Haji Murad Ali’s cost consciousness.

“My grandfather was known for his honesty. If we gave the customer even a slightly smaller kebab, he would shout at us, saying, ‘Logon ka gala kato ge kya (Don’t be a cut-throat, will ya)?’ So, even today, we try to maintain the same price-quantity ratio,” says Usman, when I meet him in Delhi at a rare food promotion that he has been roped in for at the JW Marriott in Aerocity.

Even today, Tunday Kababi, says Usman, serves two paranthas (ulte tawe ke, the big ones made on an upside down karahi) and four kebabs, each weighing 22-23 g, for Rs 64 at the Chowk outlet. The prices are slightly higher at the Aminabad and Kapurthala outlets in Lucknow, the only three legitimate Tunday Kababi restaurants. 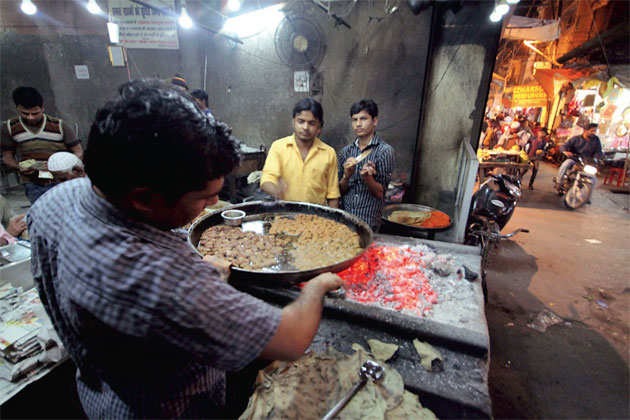 This small shop in Chowk, Lucknow, has been serving galauti kebab since 1905.

A couple of years ago, Tunday Kababi decided to go national, giving out franchising rights to all and sundry. The quality dipped, prices soared and the brand suffered. Usman acknowledges it and says he has withdrawn from all those operations. He still gets about 10-12 queries every day for franchisee or partnership offers but declines them. “My daughter is doing her MBA and my son is studying too, we will see what they want to do later. You need to be careful in the food business,” he says. 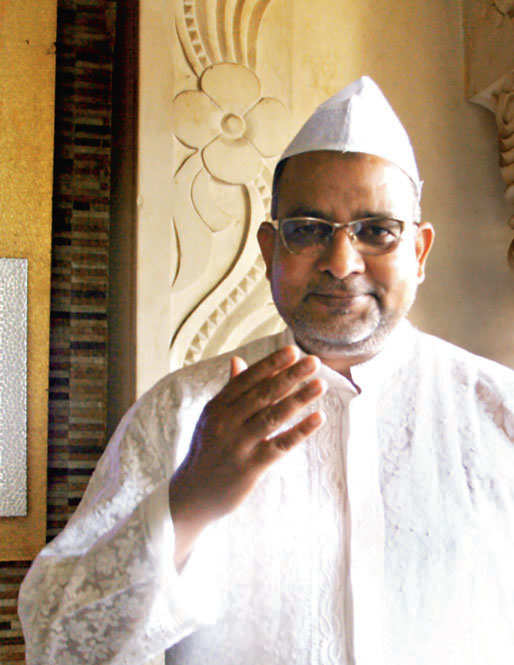 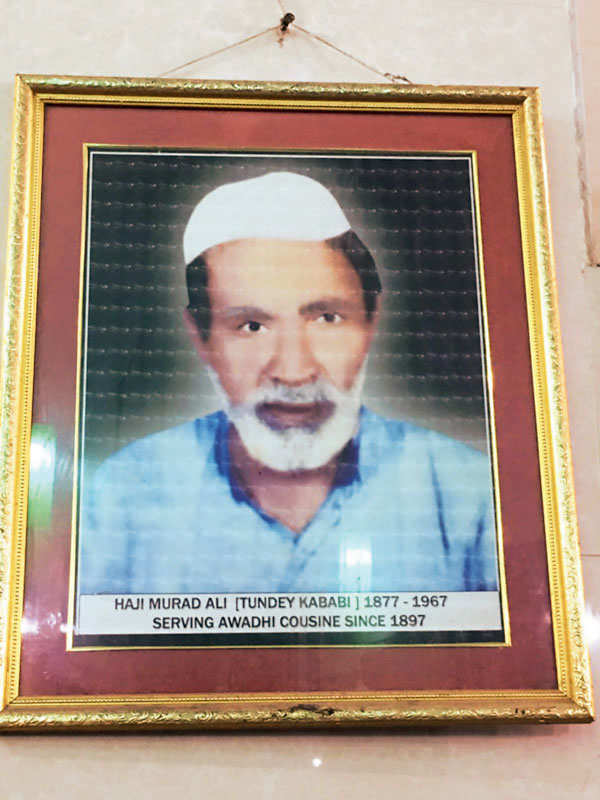 The 120-masala Secret
Most of India’s food legends are focused on one-dish shops and stalls like Tunday Kababi. Many of these are, however, disappearing in the march to modernity. Restaurant retail in the country has undergone a dramatic transformation. Chains are the order of the day. However, like Tunday Kababi, many of the old establishments find it hard to grow, despite the availability of capital and partnerships. At least part of the reason for this failure is exactly the reason for the success of these brands in the first place. 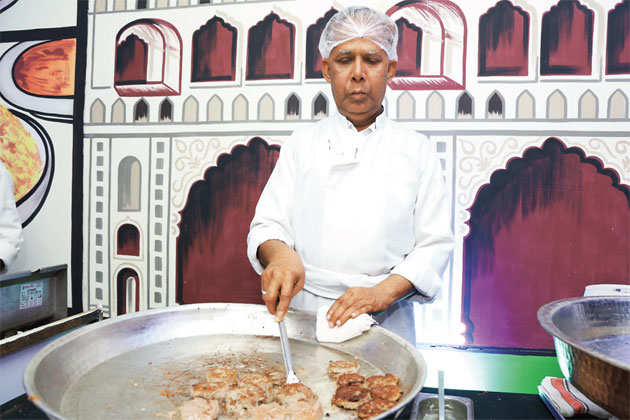 Tunday Kababi travelled from Lucknow to Delhi for a food promo

If personalised attention to detail propelled many of these brands to become the best in whatever they sold, that also becomes a limiting factor in building a chain. Till today Usman or his father, now 80 years old, supervise the procurement of the meat, the use of the right papaya in the mince and the mixing of the masalas. “My grandfather started me off as a child, dragging the cart that brought in the meat from the butcher’s. He felt that I couldn’t learn unless I learnt the basics,” reminisces Usman, as he rejects a papaya for the mince being readied for kebabs. It’s an ethic that has stayed on. Then, there is the tale about the spices.

For several years now, since the late ’90s and the early 2000s when Tunday Kababi became more visible and India’s restaurant scene was coming into its own (the first lifestyle standalones were established in the country only in 2000), Usman and his family have had chefs of all hues knocking at their doors to learn the secrets of spicing.

If the story of the one-armed cook making kebab and slicing onion rings was so compelling that it established the “Tunday” (literally “one-armed”) brand, another delicious story, of an astounding 120-plus spices going into the galauti mix, nurtured it. According to Usman, that is the original recipe of his grandfather. Some of these ingredients are elusive unani prescriptions. The family keeps the names and proportions secret. The spice mix used at all the outlets is prepared by Usman, his wife or his father. Even at the festival in Delhi, five-star chefs eager to decipher the mystery are denied a peek.

Finding what the galauti spices are has become a culinary holy grail for most Indian chefs. Many have made at least one trek from their fancy restaurant kitchens to Lucknow. Invariably, they have failed. The secret is not shared.

Taste the Tunday galautis and you will not be overwhelmed with spice. It tastes of mildly spiced mince (only lean meat is used, so there’s no flavour from fat) and there is no aftertaste either. Would it matter if there were just 12, not 120 ingredients, in this? To my palate, not. The romance, almost certainly, is in the story.

Sharar’s Lucknow was one of hyperbole, of truths couched in courtesies, of refined dissembling — where what seemed like a murraba (fruit preserve) could actually be a qorma (meat curry). Such were the games the courtly Lucknowiites played with each other and their colonial guests, before the Revolt of 1857. It is this culture that the galauti with stories of 120 spices epitomises.

Without the seductive tales, you may perhaps see the galauti for what it is: an innovation. If you cook, you will realise that the shami kebab, the ancestor or at least cousin of the galauti, is more painstaking: keema (with some fat), dal and spices have to be boiled together, judiciously, so that the meat does not overcook and dry out; then it is ground on a sil-batta to maintain texture, the patties then have to be (in some homes) stuffed with mint and onions for extra flavour, and finally the kebab is pan-fried.

The galauti kebab relies on its smoothness alone for wowness. It is a simpler kebab because mince is used raw. It can be turned out quickly, so it is fitting that this should be a bazaar, not home, delicacy.

Did it come about because the rakabdars, cooks, who had a budget of up to `60,000 a month in those days to experiment with ingredients (as Sharar says), realised that the exotic ingredient from the New World, papaya, which appeared in India only in the late 16th century, could be used as a tenderiser for delicacies that the ageing and toothless nawabs relished? Or, was it because the Awadhi high culture deemed chewing in public to be inelegant? Or, could it be, as some have suggested, the influence of the pate? 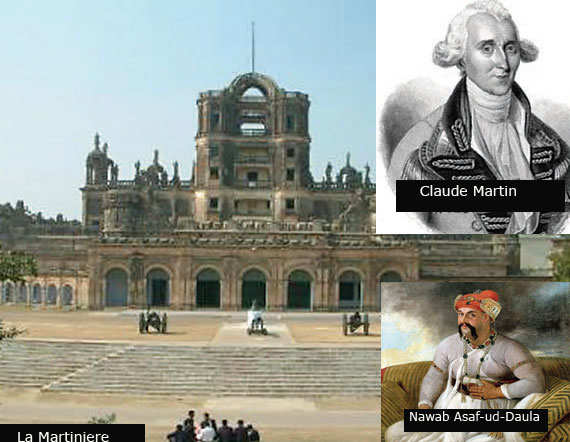 Frenchman Claude Martin, who designed many Lucknow buildings including the La Martiniere,
amassed his fortune under Nawab Asaf-ud-Daula. To think the French's silken pates influenced the galauti is
not unfounded.

The French influence in Lucknow is not often remembered. A look at Constantia or La Martiniere, the school it houses, can remind you of that. Claude Martin, the French soldier who shifted allegiance to the British and then the nawabs, built not just this elegant structure but also designed many Lucknow buildings commissioned by his patron nawab Asaf-ud-Daula. Even before him, French merchants were plying their trade in Lucknow. To think their silken pates influenced the galauti is not unfounded.

We may never know the truth. However, when in a modern restaurant you come across a smashed, pasted galauti — in all its spiced glory — served by a “contemporary Indian” chef as desi pate, you know the wheel has turned a full circle. In the word of food, that is often the case.
Download
The Economic Times Business News App for the Latest News in Business, Sensex, Stock Market Updates & More.