By Biswarup Gooptu & Harsimran Julka, ET Bureau | Sep 18, 2014, 04.00 AM IST
NEW DELHI: The churn in venture capital industry could continue as investment professionals begin exploring options outside the space, driven by a mix of opportunities offered by new economy ventures, increased early-stage investing and poor performances by funds themselves.

Earlier this month, Kanwaljit Singh, senior managing director at Helion Venture Partners, became the latest high-profile name to quit a storied investment firm. It has been rumoured that he will be starting his own consumer and consumer technology-focused seed-stage venture.

The announcement comes at a time when Helion, which manages assets of over $600 million across three funds, has increasingly turned its investment focus on mobile and technology ventures, while Singh, a veteran in the VC stakes in India, is primarily known for his consumer bets.

Singh is currently on the boards of restaurant chain Mast Kalandar and e-commerce retailer Yepme. He declined to comment on his plans, citing ill-health.

The movement of personnel has always been more emblematic of the private equity industry, but comes at a time when earlystage investing in the country is touching new highs.

VC investments are at their highest level for the first six months of any year since 2010, when $663 million (Rs 3,978 crore) was invested, according to consulting giant Ernst & Young.
ADVERTISEMENT 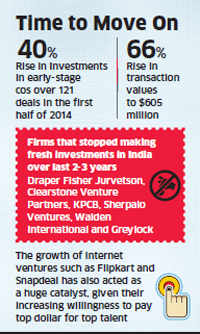 “We will see new funds being launched by experienced VCs, which will entirely be based upon domestic capital, unlike the previous Indian funds, which were entirely based upon foreign capital,” said Rahul Khanna, MD, Canaan Partners.

However, the moves have also been forced by the poor exit track record of VC firms in India, which have forced a number of them to stall their fund-raising plans, or even scale down their operations.

Some of the firms that have stopped making fresh investments in India over last two to three years include Draper Fisher Jurvetson, Clearstone Venture Partners, KPCB, Sherpalo Ventures, Walden International and Greylock.

ADVERTISEMENT
“It plays a significant role. The intent is always to start a second or even a third fund. How do you demonstrate expertise otherwise?” said Soumya Rajan, CEO of family office-focused advisory firm Waterfield Advisors.

Both Khanna and his associate Alok Mittal are in the process of starting their own ventures, after it was reported that Canaan Partners was reviewing its India investment strategy, given its lack of blockbuster exits so far.

ADVERTISEMENT
The firm has invested nearly $200 million in firms including e-commerce venture Naaptol, matrimonial website Bharatmatrimony.com and legal process outsourcing firm UnitedLex. Khanna is in the process of launching his own early-stage fund, but declined to share specifics, citing the nascent nature of developments. “It will be the first of its kind (of fund) in India,” he said.

Mittal, too, is in the process of launching an entrepreneurial venture, but did not provide a timeline for its launch. “There is a trade-off between risk and rewards. An entrepreneur could command a higher upside, but the risks are also higher. It comes down to what one wants to do going forward,” Mittal said.

The frenetic growth of consumer internet ventures, such as Flipkart and Snapdeal, has also acted as a huge catalyst, given their increasing willingness to pay top dollar for top talent. Both companies have made their intentions clear in spending a substantial chunk of their investor-funded war chests on acquisitions, as they look to take on and beat global online retail giant Amazon, in turn, providing a massive opportunity for VC personnel.

“It’s an exciting time to be here. As an investor, you’re still on the outside, but now you have the opportunity to work on a huge scale, where you set the rules and create the market,” said Abhishek Kumar, head of corporate development at Snapdeal. Kumar, who joined Delhibased Snapdeal in June earlier this year from Palaash Ventures, will lead its mergers and acquisitions initiatives.